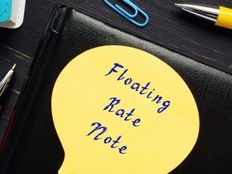 Try as they might, markets have yet to will Federal Reserve Chairman Jerome Powell away from continued interest rate hikes. The December FOMC minutes showed a Federal Reserve intent on hitting a terminal rate between 4.5% and 4.75%, with projections reaching a level as high as 5.1% before inflation is tamed to the Fed’s standards. As such, a floating-rate ETF like the WisdomTree Floating Rate Treasury Fund (USFR B-) may be able to capture higher yields in floating-rate notes.

FRNs use coupons based on short-term base rates like the London Interbank Offered Rate, with the particular Treasury type having a low or even negative correlation to fixed income offerings that may be more exposed to rising rates like more traditional Treasury offerings. FRNs also have the benefit of investment-grade status, which is appealing given the cracks in credit markets overall on top of the impact of rates on other fixed income instruments.

The floating-rate ETF USFR can play an important part in investors’ portfolios, a core alternative for short-term bond exposure with less of the aforementioned interest rate or credit risk. For investors looking for somewhere productive to keep their money while the murky 2023 picture clears up, that alternative status may prove attractive.

USFR tracks the Bloomberg U.S. Treasury Floating Rate Bond Index and charges just 15 basis points. The strategy has added $121.5 million in net inflows in the last five days alone, building on $11 billion in net inflows over one year already. USFR has also seen a YTD return of almost 2%, compared to -9.6% for its ETF Database category average and just slightly higher than its Factset Segment Average.

Investors have all kinds of options in fixed income for the new year, but with the Fed’s plans seemingly up in the air for months to come, the need for a durable strategy is apparent. That could be where USFR shines, given its fund flow momentum and low fee, allowing investors to keep their money working.