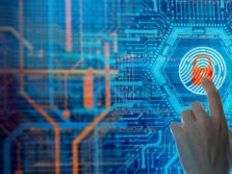 The technology sector is slumping this year, but those struggles belie the necessity and strong fundamentals of the cybersecurity industry. Looked at another way, this year’s struggles by exchange traded funds such as the WisdomTree Cybersecurity Fund (WCBR) could be opening the door to rarely seen opportunity.

In fact, when looking at the year-to-date declines of some WCBR member firms, a strong case can be made that these stocks are being unjustly punished relative to what are sturdy fundamentals.

Further buoying the case for WCBR’s recovery prospects is that inflation and a recession — gloomy as those scenarios are — aren’t a license for companies to skimp on cybersecurity spending. The opposite is probably true. Just look at the financial services industry, which is an epicenter of high-dollar cybersecurity demand.

“U.S. banks and financial institutions processed roughly $1.2 billion in likely ransomware payments in 2021, a new record and almost triple the amount of the previous year, according to a federal financial crimes watchdog,” reported Chelsey Cox for CNBC. “The total represents payments bank clients have made to possible cybercriminals. U.S. banks report the suspicious transactions to federal authorities under the Bank Secrecy Act.”

Ransomware is installed in a computer, often by a user opening a seemingly harmless email. It’s malicious software, and the cybercriminal on the other end usually threatens the victim with the release of highly sensitive data or shutting down a network.

Banks, other corporate entities, and governments have ample motivation to prevent ransomware attacks, and the best way to accomplish that objective is by embracing the services provided by WCBR holdings. Those preventative measures costs money.

Since the Colonial Pipeline hack last year, ransomware attacks are on the rise, giving corporations and governments good reason to tap into the technologies offered by WCBR components.

“The surge in reports might be due to a step up in enforcement since the Colonial Pipeline attack, according to the analysis. The attack shut down the pipeline for days, causing fuel shortages in the Southeast and snarling air traffic across much of the U.S. President Joe Biden declared a state of emergency as a result,” according to CNBC.

WCBR, which follows the WisdomTree Team8 Cybersecurity Index, turns two years old in January. While past performance isn’t a guarantee of future returns, it’s worth noting that over the past 24 months, cybersecurity stocks, in aggregate, handily topped the S&P 500 Information Technology Index.