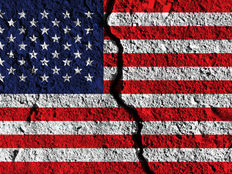 Two Senate runoffs in Georgia are scheduled for January. If Republicans retain both those seats, the government will be divided, with Democrats controlling the presidency and the House while the GOP clings to a slight Senate majority.

Broadly speaking, in the runup to Election Day, the aforementioned outcome was widely expected. The consensus appeared to be that gridlock in the nation’s capitol would benefit riskier assets. However, gridlock may not be all it’s cracked up to be. Advisors can prepare for potential risks from this scenario with model portfolios, including WisdomTree’s Global Dividend Model Portfolio.

“This model portfolio seeks to provide capital appreciation and high current dividend income, through a globally diversified set of WisdomTree’s dividend income oriented equity ETFs. The model strives to deliver dividend income in excess of the global benchmark of equities,” according to the issuer.

History Matters. Or Does It?

“Some have harkened back to Bill Clinton’s second term in the mid- to late-1990s. That was a gridlock sweet spot: A Democratic president working with Republican house speaker Newt Gingrich in a pro-business environment. The bull market raged,” notes Jeff Weniger, WisdomTree director of asset allocation. “But do you recall Bill and Newt battling a pandemic? Was China on the front page of The Wall Street Journal? Did Federal Reserve Chair Alan Greenspan have policy rates at zero?”

Furthering the case for concern about pending gridlock on Capitol Hill is that the current bull market in stocks is old by any standards, and very old compared to the bull market that was around following the 1994 Republican Revolution.

“Also, consider the bull market’s age. Bill Clinton’s run-in with the Republicans started in November 1994, barely four years into the S&P 500’s rally,” writes Weniger. “It was five more years until the market sputtered, with the bull declared dead at the nine-and-a-half year mark. COVID-19 crash notwithstanding, our current bull market is on the precipice of a 12th birthday.”

Investors should be careful if they’re expecting the Federal Reserve to save markets from the specter of gridlock-induced declines.

“Can the market rally from 2020–2024? Of course. If history is any guide, it probably will. Then again, no one has invented a cure for stock declines, not even the Fed,” concludes Weniger.