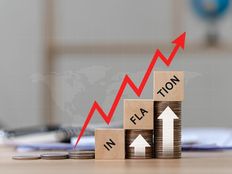 WisdomTree Thinks the Fed Is Missing the Inflation Mark

The data keeps pouring in indicating that the economy is slowing, potentially even more than signals are currently showing, and yet the Fed remains bullish on rate hikes. It’s an inflation narrative mismatch that could have serious repercussions and a disconnect that WisdomTree has been diving into lately.

October’s CPI and PPI both reflected a slowing of inflation (CPI) and inflationary pressures (PPI) and there have been other indicators of economic slowing in response to the Federal Reserve’s aggressive, restrictive monetary policy. Despite indicators, according to the St. Louis Federal Reserve President James Bullard who uses the Taylor Rule when looking at interest rate increases (an algebraic formula for calculating where interest rates should be using inflation and real GDP), the terminal Fed rate will need to be somewhere between 5%-7% most likely.

The Fed target range is currently between 3.75%-4% but according to Bullard, “the policy rate is not yet in a zone that may be considered sufficiently restrictive.”

The Problem With Inflation Rests in Housing

Jeremy Schwartz, global CIO of WisdomTree, believes that real-time inflation is lower than what the official data is reflecting, with real-world core prices declining. The biggest deviation is in how shelter is accounted for in inflation reports: it’s on a notoriously multi-month lag in CPI, where it accounts for a third of CPI and 40% of core CPI.

“If you substituted the true declines in home prices like we are seeing the last few months (and I think cumulatively home prices might fall 10-15% more from here), inflation trends are not just improving, but we have core prices actually declining. Yes, we have negative core inflation in reality!” explained Professor Jeremy Siegel, senior investment strategy advisor to WisdomTree and emeritus professor of finance at the Wharton School of the University of Pennsylvania.

Rents for October only gained by 4.7% year-over-year, the slowest annual increase in the last year and a half as reported by Realtor.com, and the third consecutive month of single-digit growth. Because of the lag in how housing is reflected in CPI, this data likely won’t show up in the CPI until late in the first quarter of 2023 (there is an upwards of six months lag to housing prices in CPI).

“The challenge is the Fed is looking at misleading data. We do not have a persistent high inflation problem like Powell states,” Siegel wrote. “Secretary of Treasury Janet Yellen, former head of the Fed… Also very disconcertingly says housing inflation is way too high. It is astounding these important officials do not understand this key issue.”