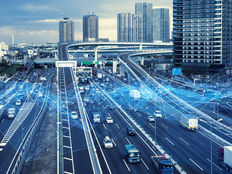 Pershing Square Capital Management founder Bill Ackman recently drew significant criticism when it was revealed he turned a $27 million bet on widening domestic and European credit spreads into a massive $2.6 billion payday, one some critics assert was made on the back of the coronavirus outbreak.

Ackman has since said Pershing Square is investing $2.5 billion in long equity positions and while the controversy is sure to remain around his credit spread bet and his alleged talking down of the U.S. equity market, the hedge fund manager may be looking to make amends with an infrastructure push.

That could breathe some new life into the infrastructure investment thesis and ETFs, such as the FlexShares STOXX Global Broad Infrastructure Index Fund (NFRA B+).

“Mr. President, why don’t you launch the biggest infrastructure program of all time now? Roads, bridges, and other infrastructure involve outdoor work that allows for social distancing. Doing so will put Americans back to work now in good paying, virus-safe jobs,” said Ackman in a Sunday tweet aimed at President Trump.

As is often the case with infrastructure and assets such as NFRA, politics is front and center, a theme Ackman appears well aware of.

“You will get unanimous support from Democrats and Republicans and give us hope for the future. Let’s get a good many of our fellow Americans working again in all 50 states while those of us with desk jobs work from home,” said the Pershing Square boss in another tweet.

Reminding investors of the impact the coronavirus is having on the economy, Ackman queried the following on Twitter: “What better time is there to build roads, bridges, and tunnels when traffic is way down?”