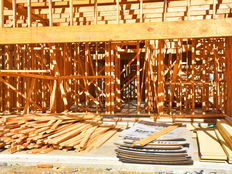 Build Something Great With a Homebuilders ETF in 2020

The  SPDR S&P Homebuilders ETF (XHB A+) took some lumps last week, but homebuilders assets could still be worth considering as this year unfolds.

XHB seeks to provide investment results that correspond generally to the total return performance of an index derived from the homebuilding segment of a U.S. total market composite index, and in order to track the performance of the S&P Homebuilders Select Industry Index, the fund employs a sampling strategy.

“Steady wage growth and a historic low unemployment rate have supported a healthy housing market,” said State Street in a recent note. “Household debt service payments as a percentage of disposable personal income is at the lowest level in history. After a slowdown in the first half of 2019, homeownership resumed its upward trend in Q3.”

The average rate on a typical 30-year fixed-rate mortgage fell to its lowest level since October, which could feed into strength for homebuilder ETFs. According to Mortgage News Daily, the rate fell to 3.69%, which could have prospective homebuyers rethinking a real estate purchase in 2020.

This fall in rates couples increased buyer sentiment tracked by a monthly survey put out by secondary mortgage market participant Fannie Mae (HPSI). According to the survey, the sentiment was high in the month of December—a time even when buyers are wary of their finances given the propensity to spend during the holidays

“Given that the US Federal Reserve signaled during the December meeting that it plans to hold interest rates steady through 2020, mortgage rates are likely to stay lower for longer, increasing housing affordability,” notes State Street.

Related: Span the Globe For Dividends…It’s Worth It

Importantly, the sentiment is improving, potentially paving the way for more upside for XHB.

“In December, homebuilder sentiment reached the highest level since 1999 as prospective buyer traffic and sales expectations continue to improve on the back of low supply of existing homes, low mortgage rates, and a strong labor market,” according to State Street. “The improvement in sales prospects has translated into more upbeat earnings sentiment in the industry. As shown in the chart below, earnings revisions for 2020 in the homebuilder industry have turned positive, exceeding the broad market.”