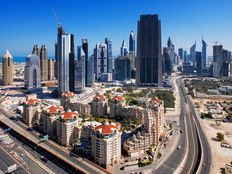 Interest rates are low throughout the developed world, adding to the allure of higher-yielding emerging markets debt and ETFs, such as the iShares J.P. Morgan USD Emerging Markets Bond ETF (EMB A-).

“EM debt looks attractive – with a 30 day SEC yield of 4.4% and offers a complementary geographical exposure to the Asia heavy EM equity indexes,” said BlackRock in a recent note.

“So far in 2019, more than thirty central banks have cut rates, with the Fed and the European Central Bank messaging that further accommodation might be needed,” said BlackRock. “In a global rate-cutting environment, investors may be able to benefit by looking to EM debt for a yield alternative.”

While a Fed rate cut helps, some emerging markets central banks are expected to lower rates, too. Brazil, Chile, Mexico, India, and Thailand are among the developing economies that have recently trimmed borrowing costs.

“Whether EMs come back in favor this week or next year, we believe most investors should consider some allocation over the long term to this important asset class. And ETFs can offer the flexibility to implement that allocation through a range of applications,” according to BlackRock.