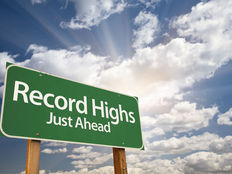 The thirst for yield is real—as the major indexes like the S&P 500 shake off the effects of the coronavirus outbreak and continue towards record highs, investors are still searching for yield. It’s warranted, especially given the low yields in safe haven debt like government-backed Treasury notes.

“Yes, we’re … near all-time highs in the S&P 500, but you still see people looking for yield,” said Jeff Kilburg, founder and CEO of KKM Financial. “You have seen a long-term attraction in this search for yield, this global search for yield.”

Right now, Kilburg is seeing a flight to safety via Treasurys and utilities.

Where can investors quench their thirst for yield? One place to look is dividend-paying equities.

“The average dividend-paying stock is twice the yield of the 10-year bond, and it’s got better taxation,” said Jeremy Schwartz, global head of research and executive vice president at WisdomTree Asset Management. “Very different volatility levels, but I think the growth profile is there.”

“For sure, this bid for yield [and]safety has pushed up all the defensive, low-volatility sectors to, I think, higher valuations. We look at utilities as one of these above-average yielding sectors,” Schwartz added. “But where utilities are issuing shares to fund their growth through 2% issuance, the average company’s buying back 2%. So, you get a 5% total dividend [with]buybacks versus, like, a 1% [net dividend for utilities].”

The coronavirus outbreak is certainly to blame for this flight to bonds, which is pushing yields to lows, but it’s difficult to forecast when its effects will subside.

“In the short run, fear and greed, momentum players, they dominate the market sometimes greater than reality,” said Jeremy Siegel, professor of finance at the Wharton School of the University of Pennsylvania.

“At this point, I look at death rates and say it’s not much different from other influenza, but others say that it could get worse. So, I mean, there’s been a huge reaction — the shutdown in travel — and obviously that affects entertainment and airlines, and that fear can keep on generating and then who knows?” Siegel said. “In two or three weeks we can say it’s relatively contained, death rates are low, not much more than others, and then we’ll get a relief rally from that. But it’s impossible to tell how long that will take.”