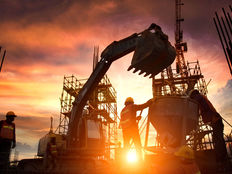 Great Infrastructure Legislation For This ETF

Bipartisanship is hard to come by on Capitol Hill these days, but one issue that has the potential to unite politicians from both sides of the aisle, albeit temporarily, is infrastructure and that’s goods news for some ETFs, including the FlexShares STOXX Global Broad Infrastructure Index Fund (NFRA B+).

“But as politicians in Washington gear up for the 2020 election season, some think Republicans and Democrats have a good incentive to work together and finally pass an infrastructure bill,” reports CNN.

“Concerns are growing about China’s economic slowdown, and the trade war is hurting construction equipment giants Caterpillar and Deere.”

In the infrastructure space, there is a never-ending need for investments to update or repair aging communication, transportation, water, and energy networks. According to the American Society of Civil Engineers, existing U.S. infrastructure is crumbling and in need of major investment. Additionally, infrastructure as an asset class has long-term viability

“More funding for infrastructure could also boost blue-collar employment growth in the heartland. That’s needed because the pace of job gains in the construction sector has flatlined in recent months; the sector has added just 31,000 jobs since May,” according to CNN.

Related: ETF Strategies That Can Help Meet the Challenges Ahead

“Caterpillar and Deere executives also noted the increase in local infrastructure spending as a positive sign in their latest quarterly earnings conference calls with analysts,” reports CNN. “That’s encouraging. But investors are clearly hoping that national politicians can put aside their differences and join states and cities by agreeing to commit more funding for infrastructure.”