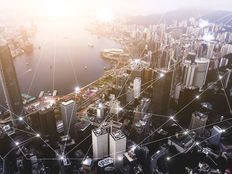 How Infrastructure Can Revive the Economy

The coronavirus pandemic is sapping the U.S. economy, dragging previously robust employment to alarmingly low levels, but some economists believe increased infrastructure spending is a potentially potent tonic. That could benefit ETFs, such as the FlexShares STOXX Global Broad Infrastructure Index Fund (NFRA B+).

“A $2.1 trillion boost of public infrastructure spending over a 10-year period, to the levels (relative to GDP) of the mid-20th century, could add as much as $5.7 trillion to the U.S. over the next decade creating 2.3 million jobs by 2024 as the work is being completed. The additional 0.3% boost to productivity per year that it generates will lead to a net 713,000 more jobs on the books by 2029,” according to S&P Global Ratings.

Infrastructure For the Long Haul

“GDP growth in the past 10 years floundered at around 2.25%–one-third the rate of 1959 when the Eisenhower Interstate Highway System was built,” notes S&P Global. “The opportunity to build infrastructure (and create jobs) during the Great Recession in 2009 was missed.”

Politics are important when it comes to infrastructure assets, but there are other themes at play that bode well for the long-term NFRA thesis.

“According to Volcker Alliance, the U.S. faces a backlog of $873 billion worth of repairs for infrastructure projects such as roads and highways across the country,” according to FlexShares. “This offers a state-level opportunity for investments, which could last for several years if not longer, as larger states enter a much-needed infrastructure spending phase.”

As is often the case, there’s a lot of infrastructure talk on Capitol Hill, but the action is the key.

“Already, discussions on Capitol Hill revolve around infrastructure relief, with President Trump calling on March 31 for a $2.0 trillion package as part of the government’s emergency response to COVID-19 (though it remains to be seen if Congress is game for signing another $2.0 trillion check),” notes S&P Global.