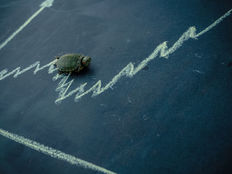 In a Fickle World, Slow and Steady Still Wins the Race

With the value factor penning a notable redemption story, investors should remember how some inexpensive stocks became cheap in the first place.

The $1.57 billion QDF allocates 43.25% of its weight to stocks with the value designation, more than five times its growth exposure, ensuring the FlexShares fund has credibility as a quality value idea.

“They trade at higher multiples than the market, but their multiples are far from the most expensive,” he says. “The reason has nothing to do with uncertain outlooks. Instead, these companies are often giants in their respective industries and face tough competition, meaning their ability to grow earnings at above-average rates is limited.”

Keeping It Slow and Steady

While many QDF many not excite when it comes to earnings growth, there’s something to be said for earnings stability and avoiding companies with spotty track records of profitability – many of which reside in traditional value strategies.

“Slow and steady is more likely to win the race—especially over the long term,” adds Sotiroff.

Many old  value funds are heavily allocated to energy and materials stocks. That’s a positive in an environment that favors cyclical stocks, but as the economic cycle moves on from recovery to expansion, those sectors can offer dithering performances.

QDF devotes just 6.60% of its total weight to those groups, but the fund is more than adequately positioned for economic expansion, as higher quality technology and industrial names combine for more than 35% of its roster.

“There is a clear relationship between price and quality,” concludes Sotiroff. “Funds typically trade off one trait for the other. Those at the far ends of this spectrum typically hold very different types of stocks. These stocks are different in the sense that they don their relatively low valuation multiples for different reasons. Understanding the forces pushing their multiples down has implications for the risks they bear and their expected performance.”