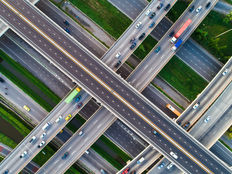 More and more, investors are looking for environmentally sound investment strategies. Believe it or not, infrastructure assets check that box and that theme is accessible with a slew of ETFs, including the FlexShares STOXX Global Broad Infrastructure Index Fund (NFRA B+).

Some academic research and other studies confirm that shoring up infrastructure around the world is actually conducive to improving the environment.

“The impacts of climate change on weather, sea levels, food, and water supplies should be seen as an investment opportunity for our cities, says global investment banking firm Goldman Sachs,” reports The Conversation. “In a report out last month the bank says cities need to adapt to become more resilient to climate change and this could ‘drive one of the largest infrastructure build-outs in history.’”

We use infrastructure every day, often without recognizing what we are doing. Infrastructure provides us with our water, electricity, and natural gas. It connects us during a phone call and allows us to get online. It assists us in traveling from place to place via roads, rails, or in the air. Without a well-maintained infrastructure, our modern economy wouldn’t function. Those are among the reasons market observers are pushing for infrastructure enhancements around the world.

Report: Why This Infrastructure ETF ‘NFRA’ is Still Important