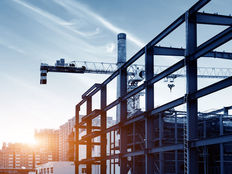 Infrastructure ETFs May be Interesting in 2020

The FlexShares STOXX Global Broad Infrastructure Index Fund (NFRA B+) is higher by more than 20% year-to-date and with infrastructure expected again be a steady asset class in 2020, NFRA could deliver more upside for investors in the year ahead.

NFRA yields a decent 2.34% and is positioned to take advantage of election year infrastructure chatter in 2020.

“U.S. transportation infrastructure growth will continue moving more or less in step with leveling off GDP next year,” said Fitch Ratings in a recent note. “Volume growth remains favorable for U.S. airports, ports and toll roads and will remain largely tethered to U.S. GDP movement, which Fitch projects will fall below 2% for 2020.”

Now’s The Time For NFRA

“Moving more closely in tandem with U.S. GDP next year will be U.S. toll roads and ports,” notes Fitch. “Stronger performance is expected for toll roads in the Southeast and Southwest regions in particular, due to stronger demographic trends versus the U.S. overall. Meanwhile, volumes at East Coast ports are likely to continue outpacing those of their West Coast counterparts due to their higher exposure to Chinese tariffs. Over time, revenues may start to decline at West Coast ports the longer the trade impasse with China continues.”

“Two other key developments are worth close watch next year, the first being the fate of PPPs as developer risk allocation led to some contractors exiting the U.S. market,” according to Fitch. “The second is emerging technologies like driverless cars and connected vehicles. Parking assets and managed lanes appear most vulnerable to this change, though more widespread risk is unlikely to manifest for at least the next decade.”