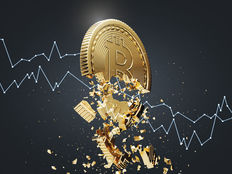 It wasn’t long ago when the idea that institutional investor backing for cryptocurrencies, namely Bitcoin, would be the major catalyst that could send digital currency to stratospheric levels. Fast forward to today’s war zone in the capital markets, the hand that was supposed to feed Bitcoin is slapping it upside the head.

After touching past the $10,000 mark earlier this year, the coronavirus outbreak is putting a damper on Bitcoin prices and institutional investors are kicking it while it’s down. It seems the leading cryptocurrency is seeing a wave of institutional sellers, which is demolishing the notion that Bitcoin could serve as a plausible safe haven.

“Large professional and institutional traders were among the biggest sellers during the rout that saw Bitcoin tumble about 40% this month, according to analysis from researcher Chainalysis,” a Bloomberg report noted. “Transfers of between 10 and 1,000 Bitcoins accounted for 70% of all Bitcoin moving through crypto exchanges, the researcher found.”

What’s fueling this flight from what was purported to be an alternative avenue of safety? Apparently, Bitcoin is not forging its own path, but following those of other safe havens like its physical counterpart gold.

Once again, per the Bloomberg report, the “flight happened just as all other types of assets crashed during the widening coronavirus pandemic. Since March 9, crypto exchanges have experienced their largest-ever Bitcoin inflows, which peaked at 319,000 Bitcoins on March 13, Chainalysis said. On a typical day, the exchanges see about 52,000 Bitcoins. But on March 12 and March 13, nine times the daily average amount of Bitcoin — an unprecedented amount — was sent to exchanges to be sold, and that led to the fall in the coin’s price, Chainalysis found.”

The coronavirus contagion certainly pumped the brakes on a Bitcoin revival as the cryptocurrency fell to half its highs in about mid-February. Since then, however, it has been holding its own.

The Halves and The Halve Nots

While it seems like the Federal Reserve’s efforts to resuscitate the markets have yet to make a lasting impact, such as slashing rates to zero and ramping up asset purchases, Bitcoin bulls also have the “halving” event to look forward to. In essence, it could be the digital currency’s form of a stimulus package.

However, there’s no guarantee that this could stop the proverbial bleeding.

“There are certainly some events that could help to drive the cryptocurrency’s price higher in the future, such as the “halving,” which will cut Bitcoin’s mining rewards in half and reduce its pace of new coin creation,” Joe Tenebruso wrote in Motley Fool. “But prices could also continue to fall, so there are plenty of risks to consider if you choose to buy today.”