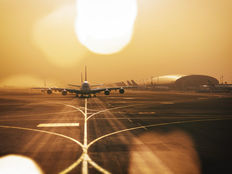 JETS and Transportation ETFs May Benefit From Airline Profits

U.S. airlines are headed for a 10th straight year of profits, which is causing employees to demand higher wages as well as increased benefits. This decade of profitability could put airlines-focused and transportation ETFs in play.

“Next year, major U.S. carriers will be negotiating labor agreements with more than 120,000 unionized employees, a process that is set to add to their expenses,” a CNBC article noted. “American will be negotiating with most of its unionized workforce, including pilots, flight attendants, and maintenance workers.”

“Labor costs are airlines’ biggest expense and they have become a larger portion of overall costs,” the report added. “Last year, labor costs ate up 28% of U.S. airlines’ $187 billion in revenue, up from a 21% share in 2008, as airlines hired more workers and compensation rose, according to data from trade group Airlines for America.”

“There are simply more funds to get and workers are cognizant they’re turning out more value,” said Sara Nelson, international president of the Association of Flight Attendants.

“When the airlines are making money, it’s hard to deny the increase (in compensation),” said Kit Darby, a consultant who tracks pilot pay. “Everybody tries to get a good contract when times are good. If it’s a short downturn, they hold on to what they got.”

With the holiday season in full swing, the number of travelers taking to the skies will see a marked increase, which should help the US Global Jets ETF (JETS C) take-offs. JETS seeks to track the performance of the U.S. Global Jets Index, which is composed of the exchange-listed common stock (or depository receipts) of U.S. and international passenger airlines, aircraft manufacturers, airports, and terminal services companies across the globe.

For investors looking for broad-based exposure to the transportation sector, they can look at the following funds: