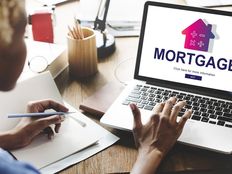 The lowest mortgage rates in years are causing a surge in mortgage refinances, with an incoming request for refinancing increasing so dramatically that the industry’s biggest trade group is significantly revising its origination forecasts for the year.

The Mortgage Bankers Association is now forecasting total mortgage originations of nearly $2.61 trillion this year, ushering in a 20.3% gain increase from 2019′s $2.17 trillion and a sizable pop from last month’s forecast of $1.99 trillion.

The refinance market is catalyzing the move with refinancing originations anticipated to double earlier MBA projections and rallying 36.7% from last year to about $1.23 trillion.

Purchase originations are now projected to rise 8.3% to $1.38 trillion, up from the prior forecast of $1.32 trillion.

While mortgage rates do not follow the Fed exactly, there is a rough correlation, and they do loosely track the yield on the 10-year U.S. Treasury.

“We’re going to have this initial rush, but even as rates rise, this refinance boom is going to be extended because the mortgage rates the borrowers see are going to stay extremely low,” said Mike Fratantoni, chief economist for the MBA.

The biggest concern is how the mortgage industry will handle all the new and unexpected volume. Loan companies such as Mr. Cooper and Quicken Loans are even increasing fees to stave off the deluge of customer calls they are currently fielding.

“Even before this last couple of weeks, we thought volume was reasonably strong, going into the spring homebuying season. Lenders were already near capacity,” added Fratantoni.

These mortgage companies are now scrambling to hire more workers. The issue, however, is training is a factor, since there is a dearth of experienced people out there, which means the process will take time. As a result, both home buyers and those looking to refinance are already seeing significantly longer wait times for loan processing or even to make contact with a loan officer on the phone, a situation that is likely to continue before it improves.

Soaring U.S. bond prices and record low yields have also heightened the risk of losses for investors in Agg tracking funds, like the iShares Core U.S. Aggregate Bond ETF (AGG A+), according to GMO, the Boston-based fund manager.

“The Agg is a portfolio that has turned prudence on its head,” said Peter Chiappinelli, a member of GMO’s asset allocation team.

For investors concerned about sinking rates which are not invested in bond funds have been looking to gold ETFs such as the SPDR Gold Trust ETF (GLD A-) or the VelocityShares 3x Long Gold ETN (UGLD C+) which have been moving well with the precious metal in the last month.