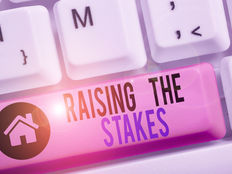 Some Are Making Bets Against FANG Stocks

With technology stocks soaring to start 2020, the FANG stocks – Facebook (FB), Amazon (AMZN), Netflix (NFLX) and Alphabet’s Google (GOOG) – are receiving renewed attention and some of that attention is combing from bearish traders.

That says traders are betting on declines for FANG stocks even as FNGU soars.

“The MicroSectors FANG+ Index 3X Leveraged exchange-traded note is up 23% this year, better than most of the other 2,300 exchange-traded products listed in the U.S., including other leveraged and non-leveraged products, according to Morningstar. That follows a 117% rise last year,” reports Dow Jones.

The underlying NYSE FANG+ index includes 10 highly liquid stocks that represent a segment of the technology and consumer discretionary sectors made up of highly-traded growth stocks of technology and tech-enabled companies, according to a prospectus sheet. Underlying components are equally weighted across all stocks, which may provide performance that allows for a more value-driven approach to investing since larger or more outperforming stocks are rebalanced to be equal to those lesser performers. The equal-weighting methodology would allow for a more representative portfolio, according to REX.

“The note also uses derivatives to magnify the moves of the underlying index. So while the index tracked by the note is up just 7.3%, the FANG+ note has risen nearly three times that. The leverage, however, works both ways and has the potential to magnify losses, making the strategy especially risky during volatile periods,” according to Dow Jones.

Should the FANG rally persist, traders may depart the bearish FNGD for greener pastures in the form of FNGU.