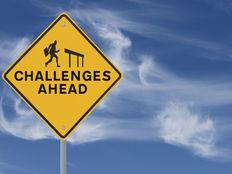 Take On Challenges Ahead With These ETF Strategies

As ETF investors build out their portfolios to adapt to changing markets, it’s important to keep in mind key trends that may shape the economic and market landscape over the next few years and look to strategies to cope with these shifts.

In the recent webcast, Riding the Trends: Five Year Outlook, Dan Phillips, Director Asset Allocation Strategy at Northern Trust Asset Management, argued that there are a number of global trends that investors should watch out for, including the global growth restructuring, irreconcilable differences between the U.S. and China, the so-called stuckflation phenomena, executive power plays, monetary makeover and climate risk.

“We believe a shifting economic model – due to geopolitical and technological developments – will slow growth,” Phillips said.

For example, global trade made up 58% of the world’s GDP, but we are seeing trade as a percentage of GDP slipping among various countries, notably in China, the world’s second largest economy.

“Our analysis suggests that the fractious U.S.-China relationship will produce a cascade of geopolitical, economic and market changes,” Phillips said.

Many countries around the world are struggling to stimulate the high growth that would come with high inflation. Over the past decade, the U.S. has seen core inflation exceed the Federal Reserve’s 2% target only 5% of the time. Meanwhile, inflation in Europe has never exceeded 2% and inflation in Japan topped 2% 10% of the time in the same period. Phillips now argued that the 2% inflation level acts more like a ceiling than a real target since many developed economies have failed to reach the target level.

Investors can look to something like the FlexShares iBoxx 3-Year Target Duration TIPS Index Fund (TDTT A-) and FlexShares iBoxx 5Yr Target Duration TIPS ETF (TDTF B+) to better handle a case of stuckflation. While inflation expectations may remain muted now, investors are already looking into TIPS as a hedge against rising prices ahead. TIPS returns are affected by interest-rate risk as well as changes in the principal value when the Consumer Price Index moves. TIPS will adjust their principal value upward in response to a higher CPI, but the reverse occurs during periods of deflation.

“Solid growth has pacified power grab concerns, but leaders are at risk of overplaying their hands,” Phillips said.

Philips underscored the fractured party politics found in Europe as the European Parliament has more voices to be heard and represent vastly different groups of people. Looking ahead, he argued that smaller parties will continue to gain in popularity and take a bigger slice of the pie away from party majorities, notably from the Group of the European People’s Party and Group of the Progressive Alliance of Socialists and Democrats.

“Stuckflation has left central banks without a North Star and seeking relevance as their independence is challenged,” Phillips said.

Given the low inflationary pressures, global central banks have had more room to throw money at their economies to stimulate growth. The Japanese central bank’s balance sheet has now expanded to 101% of GDP from 21% back in 2007. Meanwhile, central bank balance sheets have grown to 19% of U.S. GDP from 6%, 40% of European GDP from 16% and 22% of U.K. GDP from 2%.

The strategist also pointed out alternative assets to address monetary makeover, such as the FlexShares STOXX Global Broad Infrastructure Index Fund (NFRA B+), which offer investors sound fundamentals and above-average dividend yields, making the asset class appealing in the current market environment. The FlexShares Global Quality Real Estate Index Fund (GQRE ) can also be seen as a haven with less exposure to trade conflicts and REITs typically do well in an environment of falling interest rates.

Many economies are already looking to combat the negative effects of climate change. There will be growing pains as countries make the shift, such as higher fuel standards, clean energy requirements and updated building codes that would increase costs.