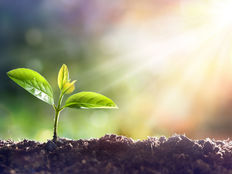 There’s Still A Bit Of Value in Growth ETFs

The SPDR Portfolio S&P 500 Growth ETF (SPYG A-) is up more than 24% this year and while growth’s continuing out-performance of the value factor has prompted concerns about stretched valuations on the former, investors may be surprised to learn that growth stocks as a group aren’t yet pressing historically high multiples.

SPYG, which tracks the S&P 500 Growth Index, and rival growth ETFs can actually perform well late in the business cycle. Investors can still enhance their portfolios as the bull market extends with growth-oriented stocks that continue to perform despite the recent bouts of volatility. The growth style has outperformed the market in spite of being prone to sell-offs with strong corporate earnings.

“Optimistic, at least toward U.S. growth stocks, is Andrew Garthwaite, the global equity strategist at Credit Suisse. In the call of the day, he reiterates an overweight call on U.S. growth stocks, which he says can outperform even when bond yields rise,” reports Steve Goldstein for MarketWatch.

“While today’s premium of growth over value is elevated, it is not indicative of an extreme event like the tech bubble,” according to BlackRock. “As of the end of August, the Russell 1000 Growth Index was trading at a 70% premium to value. While the current premium is high by post-crisis standards, it is not even in the same zip code as 20 years ago. At its peak in 2000, the P/E on the Russell 1000 Growth Index was 350% of the value P/E.”

“In a note to clients, Garthwaite points out late-cycle bull markets often see a growth bubble reaching multiples of 45 to 60 times earnings. U.S. growth stocks are trading at a mere 28 times earnings,” according to MarketWatch. “Garthwaite adds small-cap stocks tend to outperform when economic growth recovers, yet they’re not pricing in much of a recovery. U.K. small caps in particular look unusually cheap.”