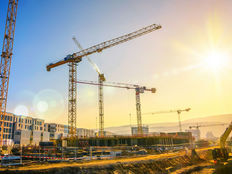 This ETF May Benefit From Efforts to Make America Great Again

On the campaign trail in 2016, President Trump made big infrastructure promises, but since then, Congress has failed to act on a sizable package to shore up America’s roads, bridges, and highways.

With 2020 being an election year, expect Trump to give infrastructure another go, an effort that could benefit ETFs such as the FlexShares STOXX Global Broad Infrastructure Index Fund (NFRA B+).

“In another election year, Trump has outlined a new $1 trillion plan for spending on roads, rails, water systems, and other infrastructure,” reports the Associated Press. “This time, the president is proposing to rely fully on federal spending. That fundamental change from his first plan drew praise from some state transportation officials and industry groups, even though Trump doesn’t spell out how to pay for it all.”

The infrastructure category has also historically offered higher dividend yields than global fixed-income and global equities, along with greater predictability of long-term cash flows. The ETF may be able to capture the growing demands of economic developing that are driving more funding into transport, power, and other systems.

“Trump’s retooled infrastructure plan relies on existing fuel tax revenue to cover much of the cost. That allows him to include billions of dollars worth of projects that likely would have happened no matter who was president,” according to the AP.

One issue Trump needs to conquer is finding revenue sources for his infrastructure ambitions.