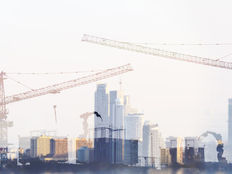 Where Will Infrastructure Stand Post-Election?

The FlexShares STOXX Global Broad Infrastructure Index Fund (NFRA B+) is an example of an exchange traded fund that should benefit regardless of what happens on Election Day. Both President Trump and former Vice President Joe Biden have ambitious infrastructure plans.

“Both candidates have advocated for greater infrastructure spending,” writes Morningstar analyst David Sekera. “Considering that infrastructure spending has a high economic multiplier effect and leads to new jobs, which would be especially helpful during this time of high unemployment, it is more likely than not that a deal will get done no matter who wins the election.”

“Under a Trump administration, we expect that infrastructure spending would be concentrated on more traditional projects like highways, bridges, and mass transportation,” notes Sekera.

Candidate and former vice president Joe Biden proposed spending $2 trillion within the next four years for clean energy development, as well as rebuilding the nation’s infrastructure.

How infrastructure dollars are spent is equally as important as knowing those dollars are earmarked for infrastructure in the first place. During the 2016 presidential campaign, Trump promised to spend $1 trillion to shore up America’s sagging infrastructure, but politicians have clearly agreed to exceed that number. That promise is likely to be reiterated on the campaign trail this year.

One issue to consider is that President Obama’s infrastructure effort, one unveiled while Biden was Vice President, largely fell flat.

“Under a Biden administration, we expect that infrastructure spending would also include energy-efficiency and clean-energy projects. For example, funding could be granted to retrofit commercial properties to improve energy efficiency,” according to Sekera.