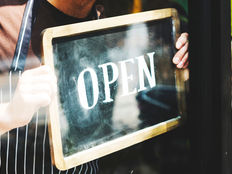 Small-Cap Surge And The PSC ETF

Smaller stocks look poised to take on leadership roles and that could prove meaningful for the Principal U.S. Small-Cap Multi-Factor Index ETF (PSC).

PSC’s underlying benchmark, the Nasdaq US Small Cap Select Leaders Index, “uses a quantitative model designed to identify equity securities (including growth and value stock) of small-capitalization companies in the Nasdaq US Small Cap Index (the ‘parent index’) that exhibit potential for high degrees of sustainable shareholder yield, pricing power, and strong momentum while adjusting for liquidity and quality,” according to Principal.

PSC is beating the large-cap S&P 500 by about 30 basis points over the past month and that could be the start of something more substantive for small caps.

“But since tech stocks began to sell off in September, briefly sending the broader market lower, smaller stocks have begun to catch up,” reports Evie Liu for Barron’s. “Since Sept. 23, the Russell 2000 has risen nearly 13%, outperforming the S&P 500 by 4 percentage points. The small-cap benchmark is now approaching its year to date high of 1705.2, set in January, and is only 100-odd points below the record it reached in 2018.”

While investors may like the safety and security of large caps, particularly in today’s uncertain market environment with Covid-19 and a forthcoming presidential election, small caps are starting to show signs of life.

“The comeback is a positive sign that investors are starting to gain confidence in the economy’s broader health, not just a few successful companies. There have been only 20 distinct times over the past 40 years when the Russell 2000 shot higher by at least 10% over a 10-day stretch, wrote Sentiment Trader’s Jason Goepfert in a newsletter last Friday,” according to Barron’s.

Historically, the small-cap/value combination has been rewarding, but it took a big hit when value languished during the recently deceased bull market. The tendency of factor leadership to change from year to year underscores PSC’s utility: with the Principal ETF’s multi-factor approach, investors don’t incur the burden of factor timing.

These days, however, PSC’s quality lean is proving meaningful for investors. That’s important because smaller companies often sport higher leverage and are more rate-sensitive than their large-cap counterparts. Bolstering the case for PSC are improving small-cap earnings revisions, confirming the group has some earnings momentum.

“Historically, rapid small-cap rallies like this have led to a positive return a year later almost 90% of the time. The median percentage gain has been in the midteens,” according to Barron’s.