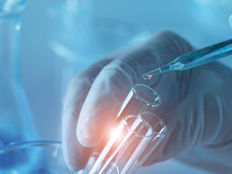 That’s one of eight globally listed ETFs that use NBI as the benchmark. For fund issuers, using NBI as biotech gauge is relevant on multiple fronts. First, its performance has been stellar. The index surged 370% during the decade of the 2010s, trouncing traditional healthcare indices in the process. Second, although NBI is a large cap index, it’s a broad one. Today it has 274 components, up from just 100 at the start of 2010. In other words, the index has captured the rapidly expanding biotechnology space.

In fact, data confirm NBI is a relevant benchmark for fund issuers looking to provide exposure beyond just the largest biotech names.

“In terms of market capitalization for the overall group, the average was $5.7 billion, while the weighted average was $43.9 billion,” writes Mark Marex, Nasdaq senior product development specialist. “The median was only $1.1 billion, however. This is reflective of the substantial representation of smaller stocks in the index, with 220 components under $5 billion of market cap comprising 21% of the index weight. 122 of these constituents measured at less than $1 billion.”

Options Outside the Large Cap Space

NBI’s inclusion of mid- and small-cap names is important because it gives the index the flexibility to make room for new biotech stocks. Since the start of 2020, there have been 123 biotech IPOs, 120 of which listed on the Nasdaq. Data indicate issuers opting to use a Nasdaq index for a biotech ETF get a more complete view of the overall market for these stocks.

“Nasdaq’s market dominance in attracting biotech IPOs over several decades has resulted in an overall market share of 98% of current listings representing $1.1 Trillion in total market capitalization as of April 2021, including 7 companies large enough to warrant inclusion in the Nasdaq-100 Index,” adds Marex.

Another plus with NBI is that its components are research- and development-intensive. In the biotech space, which is research-intensive itself, that’s a recipe for success. Additionally, a dedication to R&D helps companies avoid patent cliff vulnerabilities while making them more attractive takeover targets.

“NBI companies contributed 50% of all patents in the Precision Medicine space. For Orphan Diseases, the contributions exceeded 75%. And for a handful of others, contributions remained significant,” continues Marex.

Past performance is never guaranteed to repeat, but between its depth, diversification, R&D, and patent perks, NBI is in a class of its own.