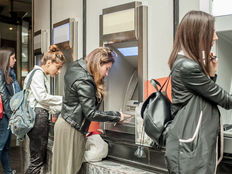 Regional Banks ETFs Are Getting It Right in 2021

Look at the performances of bank stocks ETFs this year and one thing is abundantly clear: rising 10-year Treasury yields are a boon for the sector.

As highlighted by the Invesco KBW Regional Bank Portfolio (KBWR B-), that’s particularly true of regional banks, which often lack or have much smaller capital markets and investment banking operations than their money center counterparts.

Up 36.12% year-to-date, KBWR follows the KBW Nasdaq Regional Banking Index. In addition to the obvious catalyst of rising rates, KBWR is benefiting from other trends, including the value stock resurgence. It’s not just that bank stocks, including regionals, are inexpensive in their valuations. Some market observers believe the regional space is home to a slew of undervalued franchises.

Home Bancshares and Prosperity combine for almost 5.3% of KBWR’s weight. With an average market capitalization of $4.86 billion on its 52 holdings, KBWR could also see some buyers come calling for takeovers.

That average market value is relevant for another reason. Just 2.21% of KBWR’s holdings are classified as large cap stocks. Moreover, nearly 70% are mid- or small-cap value names. That’s a favorable trait at a time when mid cap stocks are soaring and small cap value is trouncing other factor combinations.

For long-term investors, KBWR offers other attractive traits. Its 12-month distribution rate of 2.10% is compelling in today’s low-yield climate and dividend growth for banks could be restored at some point this year.

Lastly, the Federal Reserve’s benchmark lending rates are at historic lows, meaning they are unlikely to go much lower. While rate hikes are probably out of the near-term question, some market observers believe it could take two or three of those moves for rates to appear “normal” again. As the likelihood of that action gets priced into stocks, KBWR could benefit.