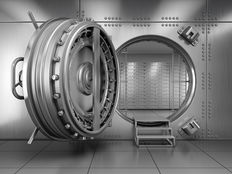 Take It to the Bank: Why Banking ETFs, KBWB Are Flying

Among the many assets getting a lift from the two Senate runoff races in Georgia earlier this week were bank stocks and the related exchange traded funds such as the Invesco KBW Bank ETF (KBWB B).

Conventional wisdom holds that Democrats favor more stringent regulation in the financial services sector, but KBWB is up nearly 11% over the past week.

Why is KBWB Looking So Good?

Rather than emphasizing the potential regulatory landscape under Democratic control, bank investors are looking to other factors following the Georgia results.

Banks “focused instead on the greater likelihood of Congress approving a big spending package to limit the economic pain from the pandemic, as well as a steepening yield curve, meaning a larger gap between short-term and long-term interest rates,” reports Carleton English for Barron’s.

Some analysts believe bank stock performance is about to take a turn for the better after falling behind amid pandemic-induced revenue concerns due to low interest rates and weak loan growth, along with credit concerns. Plus, there are some near-term catalysts for KBWB and friends, including solid credit quality.

“Increased government stimulus will boost longer-term interest rates, helping to boost banks’ net interest margins. The yield on the 10-year note has been hovering around 1%, but Mayo sees it going to 1.25% to 1.5%—still low by historical standards but an improvement from the earlier part of the pandemic,” according to Barron’s.

Adding to the case for KBWB is that regulatory fears may be overstated. The Senate is split 50-50 between the two parties, but Democrats are in “power” because Vice President-Elect Kamala Harris holds the tie breaking vote. Still, such fine margins are unlikely to lead to sweeping regulatory changes.