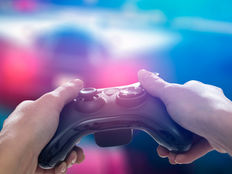 The Global X Video Games & Esports ETF (HERO) is up 56.48% year-to-date and that stellar run is buoyed by some stout fundamentals.

HERO, which launched is 10 months old, “seeks to invest in companies that develop or publish video games, facilitate the streaming and distribution of video gaming or esports content, own and operate within competitive esports leagues, or produce hardware used in video games and esports, including augmented and virtual reality,” according to Global X.

As has been widely noted, video game sales are soaring with a major assist from shelter-at-home policies forced by the coronavirus pandemic.

“According to the Q2 2020 Games Market Dynamics: U.S. report from The NPD Group, overall total industry consumer spending on video gaming in the U.S. reached a second quarter (April – June) record $11.6 billion, an increase of 30% when compared to the same time period last year, and a 7% increase over the first quarter 2020 (January – March) record $10.9 billion,” notes NPD Group.

HERO’s underlying index features 38 stocks from nine countries. The bulk of the new ETF’s top 10 holdings are video game publishers, but the fund has exposure to hardware makers and semiconductor manufacturers, among other industries, as well. Data confirm those are good places to be this year.

With gaming benefiting on multiple fronts, including the stay-at-home theme forced by the Coronavirus pandemic as well as a slew of new titles from popular franchises, HERO, and its components are delivering for investors in 2020.

“Sales of video game content reached $10.2 billion in the second quarter, up 28 percent when compared to a year ago. Gains were seen across new physical content, digital console and PC content, mobile, and subscription spending,” according to NPD.

Importantly, the big revenue numbers are spread across platforms, indicating HERO is poised to benefit from the console upgrade cycle coming later this year.

“Strong growth across Nintendo Switch, PlayStation 4 and Xbox One led to an overall hardware category sales increase of 57% to $848 million. Sales of video game accessories including gamepads, headsets, steering wheels, and other peripherals increased 50% to $584 million,” notes NPD.