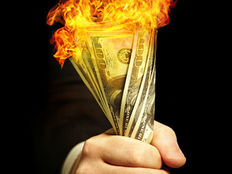 In an ongoing effort to stabilize financial markets, prevent further capital outflows, and inspire confidence, China’s central bank surprised many when it enacted its latest stimulus effort: a historic devaluation of the nation’s currency, the yuan. This sudden policy move comes only a day after a big rally in Chinese equities fueled by speculation that the government will accelerate mergers of state-owned enterprises to bolster economic growth.

All in all, investors overseas have been confronted with a slew of volatility amid increased government intervention, casting an even larger cloud over China’s already foggy outlook.

Volatile trading ensued after China’s central bank cut its daily reference rate by 1.9%, which effectively tipped the yuan lower to endure its biggest one-day plunge since 1994. Note how sharp the drop-off is for the yuan in the chart below:

The People’s Bank of China called this move a “one-time adjustment” for the yuan and said its fixing will become more aligned with market forces going forward. This historic currency devaluation effort further showcases the commitment on the part of policymakers to inspire confidence and promote economic growth amid a prolonged slowdown; more specifically, this policy move could be regarded as a reaction to the most recent (and disappointing) China exports data.

While policymakers did suggest this move should not be interpreted as a sign to a start of a deprecation trend for the yuan, given the recent streak of unprecedented government intervention overseas, we’re not too convinced they are done tinkering with the exchange rate just yet.

Despite hearing soothing words from policymakers with regards to the yuan’s sharp move being a “one-time adjustment”, this failed to shield many investors from rampant selling pressures that came as a result of the historic currency devaluation. Not surprisingly, yuan ETFs endured a very rough trading session on Tuesday following the rate cut news (daily returns for 8/11/2015):

The sharp drop in the yuan’s value across the foreign exchange market prompted an equally terrifying sell-off for China bond ETFs:

Neighboring Asian currencies were also dragged down by the yuan’s devaluation:

It’s clear that China’s policymakers are willing to do whatever it takes to bring stability and inspire growth; while these interventions generally provide positive catalysts to equity markets, they are still bound to inspire volatile trading as investors deal with looming uncertainty in China’s financial system. If you’re eager to buy into beaten down China-related ETFs now, remember to utilize a stop-loss in case steeper selling pressures return.