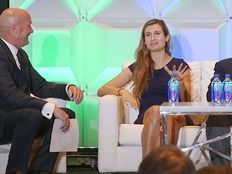 In the Know: Why Investors Must Be Strategic in 2019

With the first quarter of 2019 in the books, investors are looking at a capital market environment in the U.S. that is standing tall after stumbling in the tail end of 2018. Nonetheless, it’s necessary for investors to remain strategic when it comes to deploying capital in the current market environment.

Why the strategic bent? One only has to look back to the last quarter of 2018 to know the reason why–the Dow Jones Industrial Average fell 5.6 percent, while the S&P 500 was down 6.2 percent and the Nasdaq Composite declined 4 percent.

All in all, 2018 marked the worst year for stocks since 2008 and only the second year the Dow and S&P 500 fell in the past decade. That said, the strategy for 2019 is eponymously as such–getting strategic.

In this latest “In The Know” update featuring market themes and opportunities, Samantha Azzarello, Global Market Strategist at JP Morgan ETFs explained why investors must be more strategic in 2019 and beyond.

What investors are feeling in terms of their sentiment when it comes to the current market landscape doesn’t necessarily correlate to what the data suggests. This dichotomy was certainly evident in the fourth quarter of 2018 when the capital markets were racked by a heavy dose of volatility.

“So, I think we’re going to have to go back to 2018, which people don’t really want to do because that was a bad year for markets,” said Azzarello. “But last year, the data was so good, but the sentiment was so bad.”

Earlier this month, the IMF cut its global growth forecast to the lowest level since the financial crisis, citing the impact of tariffs and a weak outlook for most developed markets. According to the IMF, the world economy will grow at a 3.3 percent pace, which is 0.2 percent lower versus the initial forecast in January.

“Now, fast forward into 2019, we’re seeing a little bit of a reversal. We actually think sentiment is better, people are feeling better, but we’re now starting to see a bit of a softening in the data, just a little bit in the GDP data, more so in global GDP data, which is slowing down,” said Azzarello.

Is a Recession Imminent in the Near Term?

Earlier this month, the Labor Department announced that job growth in March made a comeback following a less-than-stellar February as 196,000 jobs were created as opposed to 175,000 expected by economists.

The better-than-expected payrolls brings the three-month average to a strong 180,000 jobs created per month. That number is lower than the 223,000 jobs created in 2018, but falls in line with a robust labor market.

“We look at about 25 to 30 different indicators just across the spectrum,” said Azzarello. “But the main buckets that I sort of always talk to clients about is overheating, right? So, that’s going to be inflation, wages, producer prices. Like, show me something that suggests we’re overheating.”

Global Markets on the Minds of the Fed

While the majority of the capital markets are hoping for a U.S.-China trade deal, the other saving grace for the markets to keep the 2019 rally afloat could be the central bank continuing its dovish outlook.

Following the central bank’s decision to keep interest rates unchanged, there’s been a recurring theme of “patience” in Fedspeak as of late. Federal Reserve Chairman Jerome Powell reiterated patience during last month’s press conference following the rate announcement and also mentioned that the U.S. economy is in a “good place.”

However, with a number of global events taking place like Brexit and other geopolitical factors, these occurrences could be weighing on the minds of the central bank while the economy is forging on domestically.

“We fundamentally believe the Fed was only raising rates, they were only raising rates because things were so good, because the economy could handle it,” said Azzarello. “So, now that they’re on pause, it’s like, ‘Well, wait. Why are they on pause?’ They’re just saying that they’re being cautious. And in fairness to them, there’s a lot happening in Washington, there’s a lot happening with Brexit and globally.”

Effects of the Yield Curve on Fixed Income Investing

The bond markets threw a curve ball at fixed income investors earlier this year with an inverted yield curve, sending the capital markets overall on another volatile ride–something they may or may not have been accustomed to during the fourth quarter of 2018. The short-term 3-month and longer-term 10-year yield curve inverted–an event that hasn’t been seen since 2007–just ahead of the financial crisis.

The spread between the 3-month and 10-year notes fell below 10 basis points for the first time in over a decade. This strong recession indicator contrasted a more upbeat central bank , but investors were quick to add more caution to their capital allocation.

Given this latest obstacle, fixed income investors now have to get strategic when it comes to the bond markets as well. One area that investors can look to is investment-grade debt issues with a prime focus on quality.

“Within investment grade, we like higher quality,” said Azzarello. “So, we’re saying go up the quality spectrum, if you’re going to do your investment grade piece, we want better quality, better balance sheets, all of that.”

For investors who want to satiate their appetites for yield, Azzarello and her team actually like high yield of lower quality ratings. One thing to avoid, however, is investment-grade debt that is on the cusp–BBB or BBB+–which has the danger of falling into junk status.

“Within high yield, we’re liking lower quality, believe it or not,” said Azzarello. “So, within high yield, what we don’t like right now is the things that are right on the cusp. So, we think there might be some problems there.”

Strength in U.S. equities thus far in 2019 is translating to strength abroad as emerging markets (EM) are gaining after a 2018 to forget. Nonetheless, for investors who are still hesitant when it comes to international market exposure, now is the time with a possible trade deal between the United States and China looming as the main trigger event that could send EM through the roof.

“So, we do really like emerging markets, but there’s so much fatigue,” said Azzarello. “I think, from clients and investors talking about it because it obviously has not worked year after year after year. So, it’s really hard to keep making the case for it. But I’m going to anyways.”

While the majority of investors might have been driven away by the red prices in EM during much of 2018, savvy investors who were quick to see the opportunity viewed EM as a substantial markdown. From a fundamental standpoint, low price-to-earnings ratios in emerging markets ETFs have made them prime value plays as capital inflows continue.

One suggestion, before investors deep-dive into EM, is buying with the objective of a long-term hold in mind.

“We do like them, but we’re saying you’re going to have to hold for at least five years,” said Azzarello. “And I would add, they’re on super sale. Like, they are so unbelievably cheap, these markets.”

To watch the entire latest “In the Know” show, visit: https://am.jpmorgan.com/us/en/asset-management/gim/adv/insights/etfs-in-the-know.