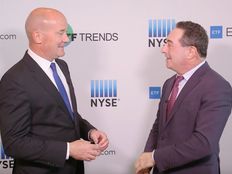 ETFs That Focus on the Entrepreneurial Spirit

Entrepreneurs who break the mold are creating quickly growing companies that investors can gain exposure to through a targeted ETF strategy focusing on these up-and-coming firms.

“We have our own unique, proprietary factors,” Joel Shulman, Founder & CEO of ERShares, said at Inside ETFs 2019.

“What we do is we invest in publicly traded entrepreneurial companies and so we cobbled together 15 different variables…. Mostly governance and the people who run the organization – true entrepreneurs, and they create alpha over on a risk-adjusted basis over a long period of time,” he added.

The Entrepreneur 30 Fund tries to reflect the performance of the Entrepreneur 30 Index, which is comprised of 30 U.S. companies with the highest market capitalizations and composite scores based on six criteria referred to as entrepreneurial standards.

The revenue screen requires a company meet predetermined criteria regarding revenue over a static threshold to be included, including, among other things, the amount and growth of revenue of a company as compared to predetermined benchmarks must be met.

More recently, EntrepreneurShares came out with the ERShares Non-US Small Cap ETF (ERSX B+), which tracks 50 non-U.S. companies from around the world with market capitalizations between $300 million and $5 billion USD and have the highest rank based on the six investment style factors.

For more ETF-related commentary from Tom Lydon and other industry experts, visit our video category on ETF Trends.