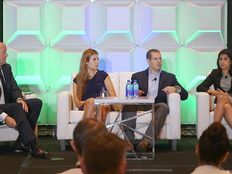 In The Know: ETF Industry Trends to Shape Portfolios

During the normal course of buying and selling securities within the capital markets, it’s easy to forget all the work that goes on in order to keep exchanges running smoothly. In fact, the smoother it runs, the easier it is to forget those involved, but that only means they’re doing their jobs and doing them well.

In the latest update of “In The Know,” three experts provided a blueprint that could serve investors in 2019 and beyond––Yasmin Dahya, Head of Americas Beta Specialists at JP Morgan Asset Management; Samantha Azzarello, Global Market Strategist at JP Morgan ETFs; and Douglas Yones, Head of Exchange Traded Products at NYSE.

In addition, they addressed issues that were raised by advisors when it comes to keeping the structural integrity of the financial exchanges intact.

The Impact of Blockchain Technology

A number of blockchain experts feel Asia could be leading the charge in blockchain technology with new developments in the making. One area in particular is in payment processing where the disinvolvement of a counterparty can provide for better, more secure transactions—at least that’s what staunch blockchain supporters may think.

If experts are anticipating more widespread adoption of blockchain in the next five years, will this upset the financial exchanges domestically?

“There’s so much infrastructure that exists, the way we run our counterparty system that all the banks are looking at this and trying to figure out how do we do it,” said Yones. “And I think we start to move in that direction. I don’t think it’s as fast as people expect because you’re talking about changing a lot of connected systems that are the best in the world, right? So, when you have the best system in the world that works and there’s no counterparty risk, we don’t think about counterparty risk. If this was a European council conference, we’d be talking about counterparties in central clearing. So, the fact that that’s gone leaves people always questioning.”

Potential Risks in the Exchanges

However, it’s not blockchain technology that is putting Yones at unease when positing on challenges affecting the financial exchanges. Instead, it has to do on the retail side.

Market orders are the simplest types of transactions when it comes to purchasing securities where a buy or sell order is executed based on current market prices. As opposed to specifying an execution price is a limit order, for example, market orders are filled at what buyers and sellers are willing to pay for the asset.

“There’s now roughly 13 exchanges, there’s 60 different trading venues that trades wrap to,” said Yones. “When you send a market order, it’s not … you know, even though everyone loves to envision the one person at the New York Stock Exchange waiting for your trade, the reality is it’s a computer network now. And things are moving truly in microseconds. So, we’re measuring our speeds. We want to be able to …. most of our trades come in, execute confirm and go back in nine microseconds, give or take. So, things are moving that fast.”

Aside from the retail perspective, there’s also the view from the ETF issuer’s standpoint in which Dahya operates. With retail clients interacting with issuers, they also are made aware of the latest goings-on within the exchanges.

“When I think about us as an ETF issuer, one thing that is different about an ETF and a mutual fund is that how we engage with our clients, it’s not directly with them,” said Dahya. “It’s through Doug’s world. And so, that is actually a very important difference that most ETF issuers have capital markets teams, whole groups of people who are there to support advisors through that and will give you similar type of advice as what Doug mentioned.”

“That enterprise question and the plumbing is really important,” added Dahya. “And I would encourage you to talk to the Capital Markets teams that ETF issuer.”

Why Investors Must Be Strategic

Samantha Azzarello, Global Market Strategist at JP Morgan ETFs explained why investors must be more strategic in 2019 and beyond.

What investors are feeling in terms of their sentiment when it comes to the current market landscape doesn’t necessarily correlate to what the data suggests. This dichotomy was certainly evident in the fourth quarter of 2018 when the capital markets were racked by a heavy dose of volatility.

“So, I think we’re going to have to go back to 2018, which people don’t really want to do because that was a bad year for markets,” said Azzarello. “But last year, the data was so good, but the sentiment was so bad.”

Earlier this month, the IMF cut its global growth forecast to the lowest level since the financial crisis, citing the impact of tariffs and a weak outlook for most developed markets. According to the IMF, the world economy will grow at a 3.3 percent pace, which is 0.2 percent lower versus the initial forecast in January.

In addition, the global volume of trade in goods and services will increase 3.4 percent in 2019, which represents a drop from the 3.8 percent gain last year.  The IMF, however, did mention that recent policy implementations like the U.S. Federal Reserve keeping interest rates steady are positive signs moving forward.

“Now, fast forward into 2019, we’re seeing a little bit of a reversal. We actually think sentiment is better, people are feeling better, but we’re now starting to see a bit of a softening in the data, just a little bit in the GDP data, more so in global GDP data, which is slowing down,” said Azzarello.

To watch the entire set of “In the Know” segments, click here.