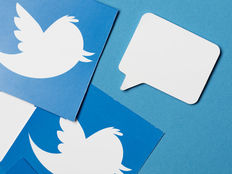 Twitter is preparing to enter the high yield debt market with its junk bond debut, but unlike companies Tesla and WeWork, the social media giant is not in a position where it’s burning cash to keep its operations afloat.

Per a Bloomberg report, Twitter “posted $856 million of free cash flow last year, can expect to be rewarded for its prudence. It garnered credit ratings in the top tier of high-yield and is marketing its $600 million deal at a yield of around 4.5%, more than a percentage point lower than average for speculative-grade debt.”

This should help bond investors who are hesitant to give out money to companies who have yet to post a profit.

“It’s an up-in-quality trade across all asset classes,” said John McClain, a high-yield portfolio manager at Diamond Hill Capital Management. “Nobody wants to be caught with their hand in the cookie jar. This is the cookie jar moment.”

“When you engage with the high-yield market, you have to have positive Ebitda and at least a path to cash flow breakeven to even have a discussion,” said John Yovanovic, global head of high-yield at PineBridge Investments, referring to the widely followed metric of earnings before interest, taxes, depreciation and amortization. “We’ll approach this one with the scars we learned from GrubHub of what could happen.”

One corner of the bond market where investors can get higher yields is emerging markets (EM). Investors can get broad-based EM exposure with the *iShares Core MSCI Emerging Markets ETF (IEMG A)*.

For investors seeking high-yielding income and EM exposure, they can look to the *VanEck Vectors EM High Yield Bond ETF (HYEM A-)*. HYEM seeks to replicate the ICE BofAML Diversified High Yield US Emerging Markets Corporate Plus Index, which is comprised of U.S. dollar denominated bonds issued by non-sovereign emerging market issuers that have a below investment grade rating and that are issued in the major domestic and Eurobond markets.

According to Morningstar performance numbers, HYEM has yielded a 10.66% return thus far in 2019. The fund gives investors the necessary diversification versus relegating a portfolio’s fixed income allocation to domestic investment-grade debt.