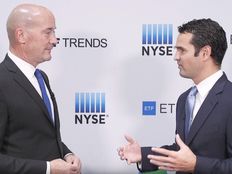 The ETF Industry's Growth Is Only Just Getting Started

The exchange traded fund universe has brought in over $4 trillion in assets under management and people are already anticipating the $10 trillion marker just over the horizon.

The exchange traded fund universe has brought in over $4 trillion in assets under management and people are already anticipating the $10 trillion marker just over the horizon.

Looking at the growth trajectory of the ETF industry, John Hoffman, Head of RIA, Private Client Group & Personal Investing Platforms, Invesco U.S., argued that it may be largely attributed to the concept of network effects.

“A network effect is a phenomenon that the more people, the more consumers that use a product or service, the more valuable the network,” Hoffman said at the 2019 Schwab IMPACT conference.

“If we look at ETFs, we think that we’re moving into the late, you know, some of the later network effects… which are really going to propel the space to the next growth opportunity,” he added.

Specifically, Hoffman argued that ETFs are still in the nascent stages of penetrating into global financial markets, and as ETFs begin to be utilized in various facets across all financial industries, more people and more assets will flow into ETFs.

For instance, Hoffman highlighted the potential growth opportunities in ETF models, which would attract another constituent base. ETFs can also become true capital market vehicles that are borrowed, with options listed on them, or pledged for collateral. Additionally, ETFs have yet go into the defined-contribution market place.