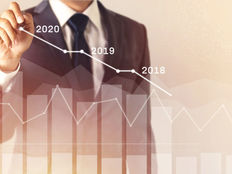 Treasury yields moved higher following the announcement of a “phase one” deal agreed to in principle between the U.S. and China on Thursday. However, what yields will do in 2020 will depend on who you ask.

“Investors are split about the direction of government-bond yields in 2020, a sign of confusion about the course of the economy and monetary policy,” wrote Daniel Kruger in the Wall Street Journal. “Economists surveyed last month by The Wall Street Journal predicted that the yield on the benchmark 10-year Treasury note could end next year above 3% or just slightly higher than 1%. The average forecast of 1.97% was only modestly higher than where the yield settled Wednesday, at 1.786%.”

As phase one of the deal comes into fruition, what happens with the rest of a trade agreement could also be a major mover in 2020. For now, however, Wall Street is cheering the latest developments in the U.S.-China trade war saga.

Per a CNBC report, “The Trump administration has reached a “phase one” trade deal with China in principle, pending approval from President Donald Trump, three sources told CNBC on Thursday. The White House has offered to scrap its next round of tariffs on Chinese goods set to take effect Sunday and slash some existing duties in half, two sources told CNBC. The U.S. proposed cutting existing tariffs on $360 billion in Chinese products by 50%.”

Where yields will head in 2020 will also by a byproduct of what the Fed decides to do with interest rates.

As widely expected by the capital markets, the central bank stood pat on rates Wednesday after three consecutive rate cuts. The Fed cited better-than-expected employment figures and a bottoming out of soft manufacturing data to substantiate the move to keep rates unchanged.

“The Committee judges that the current stance of monetary policy is appropriate to support sustained expansion of economic activity, strong labor market conditions, and inflation near the Committee’s symmetric 2 percent objective,” the Fed statement said.

“The Fed succeeded in making today’s FOMC statement as uneventful as possible,” wrote Peter Boockvar, chief investment officer at Bleakley Advisory Group. “Take all with a grain of salt and the same can be said for any 2020 forecast but particularly the Fed’s. Also, because of these forecasts being about on trend, their fed funds rate median projection is for no change in policy.”

Bond ETFs Are Enjoying a Stand Out Year

Bond ETFs have enjoyed one of their best years yet, attracting higher investment interest than the equity ETF side this year.

Fixed-income ETFs, which only make up a slice of the overall ETF universe, have for the first time brought in more money inflows than the stock ETF side after investors funneled $191 billion into bond ETFs over the first 10 months of the year, compared to the less than $158 billion that flowed into equity ETFs, the Financial Times reports.

“Adoption rates have accelerated noticeably as more investors have realised that fixed income ETFs can provide efficient solutions to some of the liquidity challenges of cash bond markets,” Deborah Fuhr, co-founder of ETFGI, told the Financial Times.

Fixed income ETF inflows more than doubled over 2019, compared to the same period last year, and have also exceeded the record creations of nearly $142 billion for the whole of 2017.

“ETFs have proved useful when we want to make a quick asset allocation decision or if we need an exposure while conducting due diligence on an active manager which can be a lengthy process,” Nicholas Mandrinos, a fixed income investment manager at Stonehage Fleming, told the Financial Times.

The rising popularity of the fixed-income plays also helped push assets in bond ETFs pass the $1 trillion milestone for the first time earlier this year. BlackRock, the world’s largest asset manager, also projected that bond ETF assets could increase to $2 trillion over the next five years as adoption picks up speed.

“We have seen investors looking to build more resilience into their portfolios which has boosted inflows into sovereign bond and broadly based fixed income ETFs. At the same time, emerging market debt and high yield ETFs have attracted strong inflows from investors looking for an income stream,” Brett Pybus, Emea head of fixed income strategy at iShares, BlackRock’s ETF arm, told FT.