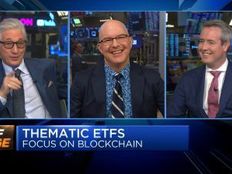 Over the past few weeks, $50 billion flowed into the market, broadly leaning on U.S. equity and fixed-income. Nadig sees international exposure as being overlooked, “I worry that U.S. investors here have gotten a little over their skies in terms of home bias. It sort of worked for you because we’ve had such a strong dollar, but I think as we think about positioning portfolios for the rest of the year we need to be thinking about international diversification.”

From 2000 through 2009 U.S. stocks were largely flat. During “the lost decade,” investors who had global diversification fared better, but Nadig says investors need to think beyond market capitalization when weighing emerging markets. Pointing to Perthe Tolle’s Freedom 100 Emerging Markets ETF (FRDM C), which explicitly excludes China and other countries with human rights issues. “I think that’s a reasonable approach,” Nadig said. “It’s not just about whether you support their policies, it has to do with rule of law and whether or not you are actually doing the same thing by investing in a Chinese equity that you are when you invest in a U.S. equity. It is reasonable to have different metrics there.”

Value investing struggled in the pandemic, which favored growth investing. “We did see some interest in mid-cap value over the last few weeks here, but in general this has been either a broad asset class market, a thematic market, or a growth market. Value hasn’t been able to catch a bid the way some of those other things have,” said Nadig.

Dividends have managed to steal a lot of value’s thunder and have become popular with investors. Crill notes that dividends can go down at a moment’s notice, and thinks that fixed income provides a less volatile, more efficient way to generate yields.

But many single stock ETFs, including several funds focused on Tesla (TLSA), have created a lot of volume. “Volume is the right word here. It’s not that they’ve garnered a lot of assets, they’ve garnered tons of volume,” Nadig said, pointing out that the funds are essentially trading their entire AUM each day – which means they are being used as designed. “They are very sharp tools, however, if you are a day trader or a hedge fund who really needs to make liquidity matter.”

Asked if they were a risk to the market, Nadig said there’s a world where the trading product gets all the play and the underlying stocks stop trading. “That’s where you could actually end up with a situation where the rebalance on the complex is driving end-of-day prices,” Nadig said. “It’s theoretically possible.”

Pivoting to cryptocurrency, Crill doesn’t see crypto as either a solid returns vehicle or a risk mitigation tool, given its volatility. He wonders where it fits in a portfolio given that it doesn’t seem to serve a concrete role. Nadig pushed back, noting that cryptocurrencies still have value as diversifiers. “I do think a few percent acts as a significant diversifier, even with this drawdown that we’ve seen,” Nadig said.