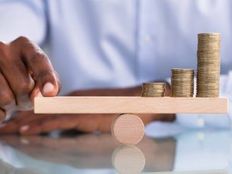 In what’s been a dismal year for equities, some less bad strategies are standing out, and that could give way to leadership if stocks bounce back next year. Broad market equal-weight exchange traded funds are relevant considerations for the 2023 rebound group.

As has been widely noted this year, growth stocks have been under duress due to rising interest rates. Conversely, equal-weight ETFs such as RSP are said to benefit from value tilts. Indeed, value is outperforming growth in 2022, but the extent to which real regime change has occurred may be more pronounced next year, indicating possible benefits accruing to RSP.

“Market leadership changes imply big shifts at the index level. The S&P 500 is nearly 50% ‘new’ economy sectors (tech, communication services, and consumer discretionary,” according to Bank of America research. “We expect the $70tn of growth stocks/government bonds created in the context of low inflation and interest rates will have to adjust sharply to a new regime of higher inflation and rates.”

Bank of America goes on to say that the pain for the new economy is still in its early innings. That’s not good news, but it could prove less bad for RSP because the equal-weight ETF allocates a combined 30% of its weight to the technology, consumer cyclical, and communication services sectors. Conversely, a cap-weighted S&P 500 ETF devotes over 44% of its roster to those groups.

“An equally-weighted S&P 500 index is underweight tech and communication services by nearly 15ppt, offering investors an option to stay invested in US equities while mitigating valuation and concentration risks,” added Bank of America.

About 30% of RSP’s holdings are classified as value stocks compared to roughly 21% in the growth category. The remainder are blend names. That’s a sizable gap between value and growth that may augur well for RSP in 2023 if value stocks extend their recent leadership.

“Valuations for the equal-weight S&P 500 index are also attractive, trading 0.7 standard deviations below historical norms despite $4.5bn of inflows YTD,” concluded Bank of America. “The equal weight S&P 500 has outperformed the market-cap weighted index by nearly 1.2ppt per year since 1990, and it outperformed by >100% as the dot com bubble deflated in the early 2000s.”