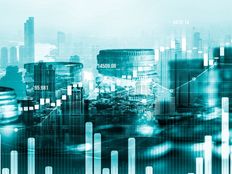 U.S. inflation has remained stubbornly high, increasing 0.4% in September on a monthly basis after a 0.1% increase in August.

Year over year, prices climbed by 8.2% in September compared to 2021. Increases in the shelter, food, and medical care indexes were the largest of many contributors to the monthly seasonally adjusted all items increase, according to the report from the U.S. Bureau of Labor Statistics

Investors looking to maintain broad exposure to the U.S. market may want to consider the Invesco S&P 500 Equal Weight ETF (RSP A-), which weights each of the 500 holdings equally at around 0.20%.

Equal-weight indexes have historically outperformed their market-cap weighted peers due to the factor tilts toward value and small size. Nick Kalivas, head of factor and core equity product strategy for Invesco, said in April that size and value have historically enjoyed periods of reflation in the economy.

The S&P 500 EWI slightly outperformed the S&P 500 during the third quarter, continuing equal weight’s trailing 12-month relative outperformance. Key performance contributors for equal weight were the underweight to communication services and the overweight to utilities, according to S&P Dow Jones Indices.

Equal weight also outperformed the S&P 500 by 2% in both the first and second quarters.