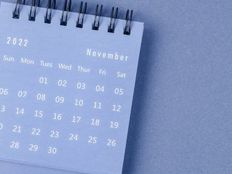 The S&P 500 advanced 5.6% in November compared to the S&P 500 Equal Weight Index’s gain of 6.7%. While equal weight has consistently outperformed this year, the gap between equal weight and the S&P 500 in November was in the top quintile of historical experience, according to S&P Dow Jones Indices.

S&P Dow Jones Indexes said in November it is relatively unusual for value to outperform growth in a month when the S&P 500 rises. Notably, equal weight has continued to outperform despite the S&P 500 now posting two consecutive months of positive performance.

According to S&P Dow Jones, the weighted average capitalization of most factor indexes is below that of the S&P 500, so, other things equal, most factor indices will benefit from a tailwind when smaller companies outperform.

The portfolio overlap, as measured by the percentage of index weights held in common, between the S&P 500 and equal weighting is 52% as of September 30, according to S&P Dow Jones Indexes.