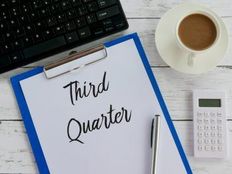 The S&P 500 EWI slightly outperformed the S&P 500 during the third quarter, continuing equal weight’s trailing 12-month relative outperformance. Key performance contributors for equal weight were the underweight to communication services and the overweight to utilities, according to S&P Dow Jones Indices.

Five out of 11 equal-weight sectors outperformed their cap-weighted counterparts during the third quarter. The sectors in which the EWI outperformed were industrials, technology, utilities, real estate, and communication services.