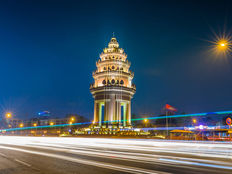 The U.S.-China trade war saga once again put emerging markets (EM) assets on a rollercoaster ride in 2019, but will it smoothen for ETF investors in 2020? In the South China Morning Post, Jim O’Neill cited three variables that could upset the balance for EM in 2020: U.S. President Donald Trump, the Federal Reserve and China.

President Trump’s tariff war with China racked the news-sensitive markets with heavy doses of volatility and more could come in 2020 as Trump vies for reelection.

“For starters, we are living in extraordinary times, owing to the unpredictable personality of United States President Donald Trump,” said O’Neill. “As the 2020 US presidential election approaches, his behaviour is likely to become even more erratic. To improve his re-election chances, will he engage in even more sabre-rattling, threatening, say, additional tariffs against China or military action against Iran? Or will he focus on keeping financial conditions accommodative of a slowdown or recession just before the election? There are no obvious answers.”

The Federal Reserve took a 180-degree turn from their rate-hiking measures in 2018 with rate cuts in 2019. Their monetary policy in 2020 will continue to influence the EM space.

“A second complication for the 2020 outlook is monetary policy,” O’Neill said. “What path is the US Federal Reserve likely to take, and what will it mean for the dollar? These two related issues tend to have a disproportionate influence on developing and emerging markets, particularly those with a lot of dollar-denominated debt.”

“If the Fed continues easing its monetary policy as expected, and if the dollar stops rising, emerging markets will have less to worry about,” O’Neill added. “But if the Fed is forced suddenly to start tightening – for example, if inflation finally picks up – developing and emerging markets would fare poorly, as would the rest of the global economy.”

Lastly, China will continue to play a major role as the top economy in the EM space. Given that its second to the U.S. in terms of GDP, it’s surprising it’s still tagged as a EM nation.

“A third issue, of course, is China, which to my surprise is still described as an ‘emerging market,’” said O’Neill. “Given China’s ever-expanding role in most other countries’ economies, it has not fit the traditional definition of an emerging market for quite some time. Still, I suspect that the label will persist as long as China’s per capita income lags behind that of advanced economies.”

By O’Neill’s account, however, emerging markets present a value option for investors looking to pick up overseas assets that are relatively undervalued versus U.S. equities.

“A final issue for so-called emerging markets will be their equity market valuations,” O’Neill said. “As matters stand, emerging-market equities are generally inexpensive – and, by some measures, quite attractive – relative to equity and bond markets globally. If Trump decides to play nice, the Fed remains a benign influence and China stabilizes its annual growth rate just below 6 per cent, emerging-market equities could do rather well in 2020.”