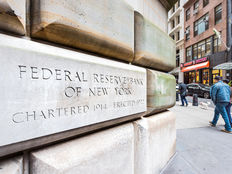 As Fed Eyes Corporate Bond ETFs, Stocks May Be Next

While the Federal Reserve may not be in a position to buy equities to support the markets, policymakers could begin to look at stock ETFs in the future.

“It would be a substantial change to give the Federal Reserve the ability to buy stock,” Former Federal Reserve Chair Janet Yellen told CNBC. “I frankly don’t think it’s necessary at this point. I think intervention to support the credit markets is more important, but longer term it wouldn’t be a bad thing for Congress to reconsider the powers that the Fed has with respect to assets it can own.”

Yellen pointed out that the Fed is only allowed to hold government debt and agency debt with government backing. The central bank has also received special powers during the current coronavirus pandemic to buy other assets like corporate debt through ETFs. However, the Fed would need additional authority from Congress to buy stock-based ETFs.

The Fed may even go the route of the BOJ’s JJPX-Nikkei 400 Index in selectively picking out companies with strong fundamentals as a way to maintain a standard of quality in their equity exposure. The JPX-Nikkei 400 Index employs a rigorous screening process based on return on equity, cumulative operating profit and market capitalization to select high-quality, capital-efficient Japanese companies.

For now, David Mann, Head of Capital Markets, Global ETFs, Franklin Templeton, argued that around $140 billion of assets under management across 60 funds that meet the Fed’s eligibility criteria as the central bank looks to purchase investment-grade corporate bond ETFs. The ETF that could be purchased would be limited to the largest investment-grade ETFs as was initially speculated since they would have the highest number of possible sellers.