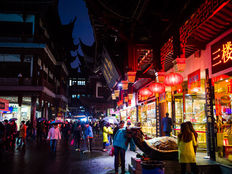 China Technology ETFs May Be a Value Opportunity

The Chinese technology sector has fallen victim to the protracted U.S.-China trade war, but as progress is made, this downtrodden tech segment along with related exchange traded funds could be an opportunity for investors.

Invesco’s chief global market strategist Kristina Hooper argued that now is the time to buy Chinese technology stocks, adding that China has the most to gain from trade negotiations and may even emerge from the war as a winner, CNBC reports.

“This could be a scenario where China is actually able to stimulate its economy enough to ride out this war,” Hooper told CNBC. “We’re looking at the potential for more fiscal stimulus, more monetary policy stimulus and so that could put China tech higher than where it is today.”

“Certainly, China tech in general looks good, but I think those large tech names are best positioned,” she added. “Valuations are so low. We look at it from a price-to-sales ratio standpoint. Just screaming buys in China.”

As a way to help investors hone in on the China tech segment, Invesco offers a line of China country-specific ETFs, including the focused Invesco China Technology ETF (CQQQ B-). CQQQ is based on the AlphaShares China Technology Index, which is designed to measure the performance of the investable universe of publicly-traded information technology companies open to foreign investment that are based in mainland China, Hong Kong or Macau.

Additionally, investors can look to other options such as the Global X MSCI China Information Technology ETF (CHIK), which tries to reflect the performance of the large- and mid-capitalization segments of the MSCI China Index that are classified in the Information Technology Sector as per the Global Industry Classification System, and the KraneShares CSI China Internet Fund (KWEB B+), which tracks a portfolio of Chinese internet and internet-related companies.