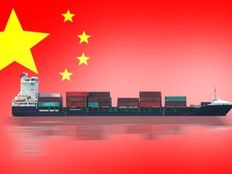 The ongoing saga known as the U.S.-China trade negotiations is already taking an even more contentious turn, which could spell trouble for the capital markets this week.

China has announced it will be raising tariffs on roughly $60 billion worth of U.S. goods beginning midnight (Beijing time) June 1, according to China’s State Council Customs Tariff Commission.

On Friday, the U.S. hiked tariffs from 10% to 25% on $200 billion worth of Chinese exports after trade talks held in Washington failed to produce a breakthrough.

On Monday, China announced that:

After a strong first quarter to begin 2019, the second quarter could be marred by trade wars as a U.S.-China trade deal that was priced into the markets went from one with the potential to bear fruit to now one that tastes like bitter fruit–one that China is not willing to swallow.

“At no time will China forfeit the country’s respect, and no one should expect China to swallow bitter fruit that harms its core interests,” the People’s Daily, a newspaper controlled by the Chinese ruling Communist Party, said in a commentary on Monday.

Despite the latest tough talk, China, however, was staunch in its unflinching stance.

“The perception that China cannot bear it is a fantasy and misjudgment,” the commentary said. “If they weren’t being seriously provoked, the Chinese people would not favor any trade war. However, once the country is strategically coerced, nothing is unbearable for China in order to safeguard its sovereignty and dignity as well as the long-term development rights of the Chinese people.”