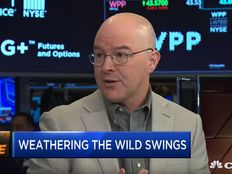 ETF Trends’ CIO and Director of Research, Dave Nadig, was able to stop by the NYSE during a tumultuous day, to hop on CNBC’s “ETF Edge” with Bob Pisani, and go over the state of crude oil and what that means for ETFs.

With Russia and Saudi Arabia failing to reach an agreement on an oil production cut, resulting in slashed prices and oil stocks heading into a deeper tailspin, Nadig does have some thoughts on how the ETF structure has held up during this volatile period. As he states, it’s been a great victory for ETFs as a structure.

Nadig continues, “Everybody’s been concerned, through the mainstream media, that a big volatility spike like this would unravel some part of the market we didn’t understand. In fact, the opposite has happened. ETFs have delivered like champs here. There have been no major breaks. Even with the circuit breaker hit today, to reopen off of it was actually flawless.”

Jumping in is Samara Cohen of iShares and runs the iShares iBoxx $ High Yield Corporate Bond ETF (HYG B+). Cohen addresses the high yield market, which is under pressure because of exposure to energy stocks recently with significant debt. She agrees with Nadig, stating how HYG is moving very similarly to ETFs broadly.

In terms of why things have held up so well, it comes from the bond market being better with fixed income ETFs in it than without. They provide support to the bond market. It’s a place for investors to exchange risk, with the bulk of that risk happening while it was balanced trading across buyers and sellers on exchange, which is all very supportive to a high-velocity market.

Nadig also notes how, despite last week’s hiccups, there have been net inflows going into ETFs. “Last week was a positive week for ETFs, pretty much across the board, except for international equities,” Nadig adds.

As he continues, the reality currently stands as investors using ETFs as their core tool for expressing opinions in this market.