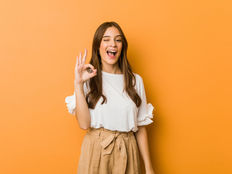 Investors might be focusing too much on a U.S.-China trade war and should laser in on the hard economic data, which suggests that the economy is doing just fine and should translate into continued strength for U.S. equities.

For example, the U.S. unemployment rate declined to a 50-year low during the month of September. In addition, retail sales grew more than expected during the previous month.

Furthermore, the Bureau of Labor Statistics said last week that the U.S. unemployment rate dropped to 3.5% during the month of September, which signifies its lowest level since December 1969. Also, nonfarm payrolls increased by 136,000 in September versus 168,000 in August.

However, the stock market has been languishing due to weaker-than-expected soft data like corporate and consumer sentiment surveys as well as numbers like the purchasing managers’ index (PMI).

“While the survey data have been steadily disappointing expectations, hard data have been a source of positive surprises,” said Doug Peta, chief U.S. investment strategist at BCA Research, in a note. “The labor market remains vibrant enough to exert downward pressure on the unemployment rate, and services continue to expand despite the contraction in manufacturing, both here and abroad. The expansion has slowed, but it’s not finished yet.”

Will the capital markets eventually refocus on just the hard economic data? If so, this could translate to strength for U.S. equities via relative exchange-traded funds (ETFs).

For investors who may be sensing continued upside in U.S. equities over international equities, the Direxion FTSE Russell US Over International ETF (RWUI) offers them the ability to benefit not only from domestic U.S. markets potentially performing well but from their outperformance compared to international markets.

Worries of slowing global growth and inverting yield curves haven’t slowed down the U.S. For investors who are worried that U.S.-China trade wars will feed into more weakness for U.S. equities, they can feel at ease knowing that when it comes to relative value ETFs, the United States is still the place to be.