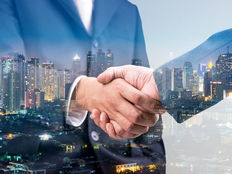 U.S. markets have come to life this week after optimism from improved prospects of a U.S.-China trade deal came when U.S. President Donald Trump said in a tweet he “had a very good telephone conversation” with Chinese President Xi Jinping. The positive news could cast emerging markets in a positive light as the hopes for a trade deal don’t appear dashed just yet.

Had a very good telephone conversation with President Xi of China. We will be having an extended meeting next week at the G-20 in Japan. Our respective teams will begin talks prior to our meeting.

The G-20 Summit in Japan will be on the docket for June 28 where the two leaders of the world’s largest economies will discuss the current trade impasse. However, some economists are doubtful that a tangible trade deal will get done.

“We do not believe that the meeting will deliver a trade deal, even if the meeting does take place. From the Chinese side, the discussion with US President Trump is expected only to exchange views on fundamental issues concerning the development of China-US relations,” Iris Pang, Greater China economist at ING, wrote in a note.

“The news on the talks in Osaka is a short term positive for asset markets, but we believe any talks will change little unless either side makes some meaningful concessions, which we do not view as likely at this time,” Pang said.

Playing the EM over DM Angle

2019 has thus far seen the reemergence of emerging markets (EM), but while investors are sifting through the plethora of opportunities the EM space has to offer, investors can play to the strength of the EM space over developed markets.

“EM’s discount to developed markets has been relatively attractive. At the same time, earnings expectations have improved and actually look favorable for EM,” Direxion Investments noted in a 2019 Relative Weight Spotlight. “Of course, if the Federal Reserve feels that the data to raise rates faster than expected, EM would suffer. Overall, if some of the concerns, such as trade or idiosyncratic issues do not come to fruition, investors may jump into EM equities, especially with the attractive relative valuations. Net-net, the direction of global growth will likely remain the greatest driver of performance with EM outperforming if growth ticks up and DM doing well with slowing growth.”