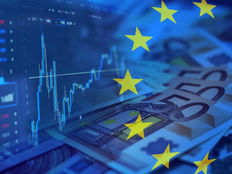 According to ETFGI data, European-listed ETFs have accumulated $1 trillion in assets for the first time last month after investors funneled a record $125.2 billion of new cash into these passive products last year, or more than double the $56.8 billion for 2018, the Financial Times reports.

The ongoing underperformance in the active space has continued to drive away disillusioned investors that have had enough of weak performances and high fees. Nine out of 10 actively managed pan-European equity funds underperformed their passive benchmarks over the 12 months ended June 30, according to the latest data. According to S&P Dow Jones Indices, active pan-European fund managers only provided a modest improvement in performance over longer periods up to 10 years.

“ETF usage by retail investors in Europe still lags far behind the US but it has started to catch up from a very low base,” Deborah Fuhr, co-founder of ETFGI, told the Financial Times. “Some fund platforms also do not offer ETFs, which has slowed adoption among retail investors.”

Regulatory changes in Europe has also helped bring more money into ETFs. For example, the U.K., the Netherlands and Switzerland have all banned financial advisors from accepting commissions on recommending active funds. The far-reaching new European regulations introduced in 2018, or Mifid II, have also helped cut costs for ETF providers.