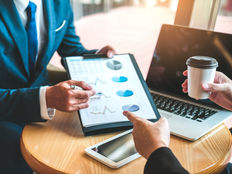 Financial stocks and sector-related exchange traded funds were under the microscope Monday as bank stocks kicked off the second-quarter earnings season, with Citigroup (C) posting its latest quarterly results and many more to follow up after.

The Financial Select Sector SPDR (XLF A), the largest financial services ETF, was 0.5% lower on Monday.

Additionally, revenue at the bank was a slightly better-than-expected $18.76 billion, or up 2% from $18.47 billion a year ago. In comparison, analysts polled by Refintiv previously projected revenue of $18.5 billion.

Monday marked the first day of the big earnings season with Citigroup being the first of the big U.S. banks to report second-quarter results.

Banks have previously warned that clients remained cautious despite the record run in the stock market and were not paying banks to help them leverage new bets.