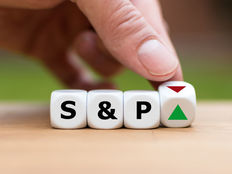 Global investment firm Goldman Sachs raised its year-end price target for the S&P 500, but simultaneously, the firm also lowered its earnings forecast due to weaker economic activity and profit margins. How will this all translate to U.S. equities versus international equities?

The firm lowered its 2019 earnings-per-share forecast for the benchmark index by $6.

“Economic growth has been below-trend, oil prices have been range-bound, and tariff uncertainty has not abated,” analysts led by chief U.S. equity strategist David Kostin, said.

“The dovish Fed pivot has driven the equity market rally in 2019, and we expect low interest rates will continue to support above-average valuations going forward,” the note said.

The U.S. economy added 170,000 nonfarm payrolls and the unemployment rate currently stands at a low 3.7 percent, but capital markets are still expecting the U.S. Federal Reserve to cut interest rates this week. Will a 1/4-point cut continue to provide strength for U.S. equities?

The Commerce Department recently reported that Gross domestic product (GDP) fell during the second quarter to 2.1 percent, but still bested Wall Street analysts who were expecting a larger decline. GDP fell from 3.1 percent in the first quarter, which represents the weakest increase since the first quarter of 2017.

For investors sensing continued upside in U.S. equities over international equities, the Direxion FTSE Russell US Over International ETF (RWUI) offers them the ability to benefit not only from domestic U.S. markets potentially performing well, but from their outperformance compared to international markets.