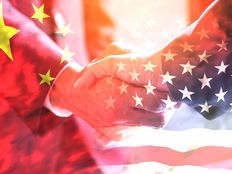 After reaching a Phase One trade deal recently, which sent markets to fresh highs, business leaders at the World Economic Forum in Davos, Switzerland are a bit more skeptical that the most recent set of trade negotiations between China and the U.S. will result in a “phase two” deal before the completion of President Donald Trump’s first term.

The Phase One trade deal, which had reached an impasse around Thanksgiving, raised fears that an accord would collapse again, dragging stocks and hopes for a halt to the nearly two-year-old trade war with it. But then just days later, President Trump announced that a deal would be signed in January, sending the market on a solid upward trajectory that was aided by the holiday season.

U.S. markets have already rallied since President Donald Trump announced the deal in the Oval Office last month. The iShares MSCI China ETF (MCHI A) has climbed almost 9% over the past month, compared with a more modest 3.2% gain for the S&P 500.

An executive who has ties to Trump said Chinese trade officials have discreetly revealed to business heads that they would like all tariffs to be be axed prior to a new trade deal. This executive declined to be named since the conversations were considered private.

Prior to the completion of the Phase One trade deal, President Trump temporarily roiled markets when news was released that he planned to leave the existing tariffs in place until at least the next election.

“There are no other oral or written agreements between the United States and China on these matters, and there is no agreement for future reduction in tariffs,” Treasury Secretary Steven Mnuchin and US Trade Representative Robert Lighthizer said in a joint statement to Business Insider recently. “Any rumors to the contrary are categorically false.”

Michael Corbat, the CEO of Citigroup, added that he feels that maintaining the remaining tariffs on China is a strong incentive to keep them at the negotiating table. Still, he acknowledged that President Trump is going to be pressured by corporate CEOs and congressional leaders to complete a phase two deal done if he gets reelected.

“I don’t think we see phase two in the remainder of this term, but I think if he is reelected certain people are going to try to hold his feet to the fire to deliver on this. I think some Democrats are going to come back and say, ‘You promised us this and you haven’t done it,’” Corbat said on the sidelines of Davos.