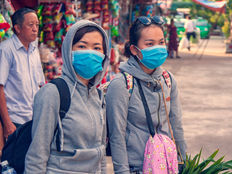 How Likely will the Economy be Affected by the Coronavirus?

A coronavirus, which is an illness that causes a type of pneumonia, was thought to have originated at a wholesale seafood market in the Chinese city of Wuhan, where it was first reported in late December. Now that virus has spread to more than 300 people in China, having already killed six individuals, ahead of the upcoming lunar new year holiday celebration.

With the upcoming Chinese New Year, disease prevention experts are concerned that the virus could disseminate rapidly during the busy travel period. Officials already have confirmed that the new enigmatic virus can be transmitted between humans and noted that 15 medical staff have now been infected, stirring fears of a international pandemic like the deadly SARS crisis in 2003, and prompting airport authorities around the world to intensify screening of travelers arriving from China.

An additional concern however, is that the outbreak of the disease could plague the economy, experts warned as they recalled the fallout from the virulent SARS epidemic.

On Tuesday, the World Health Organization (WHO), warned that the coronavirus was likely to disseminate. “More cases should be expected in other parts of China and possibly other countries in the coming days,” said WHO spokesman Tarik Jasarevic.

While the WHO does not suggest travel restrictions at this time, the organization explained that it will hold an emergency committee on the virus on Wednesday to consider declaring an international health emergency.

BREAKING: WHO Director-General @DrTedros will convene an Emergency Committee on the novel #coronavirus (2019-nCoV) under the International Health Regulations.
The Committee will meet on Wednesday, 22 January 2020. pic.twitter.com/w3w7ZuoTeG

Many people still recall the SARS crisis, which hit China in 2002 and was identified in 2003, killing nearly 800 people worldwide. It spread to other Asian cities such as Hong Kong, Singapore, Taipei and Beijing, and resulting in a severe downturn in the economies there.

“I remember the SARS outbreak very, very clearly and the impact it had. These things have an enormous hit on economies,” said Rob Carnell, Dutch bank ING’s chief economist, adding that some countries even slipped into recession.

“It is not inconceivable that if Wuhan becomes more widely spread, and starts to claim more lives, that it will result in a similar response,” added Carnell.

One issue with the SARS crisis, according to an opinion editorial published Sunday, state tabloid Global Times was that the Chinese sought to cover-up the problem.

“In the early moments of SARS, there was concealment in China. This must not be repeated,” the editorial said.

While the coronavirus is rumored to be less virulent than SARS, as of now, the impact on the economy could still be significant, as people avoid public places, driving down purchasing.

“Things like this … stop people from undertaking economic activity. You don’t go out. You don’t travel. You don’t eat out,” Carnell warned. “You don’t even need lots of people to die or even get sick. You just need people to be worried about that to have a very very massive impact, and potentially quite a long-lasting impact.”